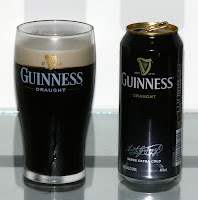 By Johnny Lager
On a cold, wet day like this one, make for yourself...

The Prep:
You will need a 20 oz. imperial pint glass, a Guinness tall-boy and some espresso. Although I was a famous beer-can-hater, I've come around and these tall-boys are just under a pint, which is perfect. 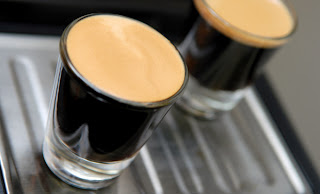 Some people like to brew their own espresso, and I salute them. They are the vigorous, can-do types that make our land great. But the how to's on that are a bit dicey, so I will not cover them here. Stop at a café and buy a few shots of espresso, it'll give the espresso time to cool down, if you don't like hot Washingtons.

The Build:
1) Open a chilled Guinness tall-boy. Warm ones explode.
2) Pour the espresso into an pint glass.
3) Pour the Guinness into that very same pint glass.
4) Enjoy. Like crazy.
5) Do important things. But don't drive.

The Experience:
Like it's namesake, The George Washington is unexpectedly bold, smooth, purposeful and honest. I'm getting a little teary over here. It's flavor starts with the familiar, pleasant, mild taste of Guinness; as you continue, it darkens into rich coffee without tipping past its base component. The finish mellows back to creamy, extra-stout, but leaves a sweetened coffee aftertaste. While there are much more flavorful stouts on the market, I find that Guinness' milder flavor blends quite well with the espresso. If you have any suggestions for other stouts, please put them in the comments below. 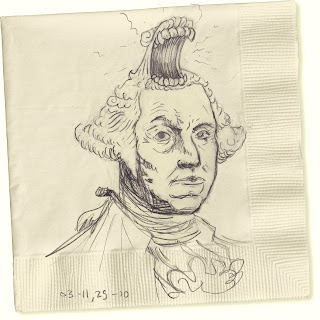 As the first stirrings of spring are in the air and the snow melts from the meadows, we are reminded that there is work to do. We must renew our vigor and resolve. But, it's still cold and dreary! What shall we do?


Well, pull up an old timey tavern chair and sit with ol' Johnny Lager by the fire, I've a tail to tell, and a hell of a cocktail with which to wake you from winter's spell.

The Father of Our Nation
By 1775, the American colonies were sick and tired of England's Shenanigans and went looking for a bad-ass to square things with the Brits. Willing to do his share, George Washington, a militia leader, was appointed commander-in-chief of the American revolutionary forces. By 1783, he and his scrappy 13 colonies (plus France, but whatevs) pushed the British Empire out of our land. To learn more, watch Braveheart, pretend Mel Gibson is George Washington, and turn it off before Mel is betrayed. Oh, and Patrick McGoohan didn't kill Washington's wife.

At the end of revolutionary war, the defeated King George III, asked what Washington would do. When he learned that Washington wanted to return to his farm; King George III said, "If he does that, he will be the greatest man in the world." Washington indeed returned to private life on his (ahem) hemp plantation and thus was (retroactively) declared the "greatest man in the world," by his enemy. Process that. My mom doesn't think that highly of me.

Thankfully Washington returned to duty, presiding over the drafting of the Constitution, becoming the (more or less) First President of the United States and avoiding further wars with England and France. And he did it all while wearing a jaunty powdered wig. With wooden teeth. Washington had the wooden teeth, the wig did not.

The OTHERSide UPDATE! They are CLOSED! BOO!
Which brings me, of course, to modern day Boston. It was here that I first tried the cocktail that could only be named for the man who delivered us from the sinister English, and single-handedly co-founded this nation. Fittingly, I discovered it in the fiercely independent OTHERSide Café, hidden on the west-most block of Newbury St. I've already discussed this undeniably American establishment, but to paraphrase: it has a three-fold charm; 1) it is staffed by hip, friendly bicycle messengers. 2) Their gourmet panini, wraps and other fair are far better than their competitors. 3) They serve kick-awesome beers all the ding-dang day long and well into the night. Fortunately, some of the managers are old friends, so my enthusiasm for charm #3 (read: my voracious consumption of curiously high proof lager, with great alacrity) is tolerated. Sadly, this drink is no longer offered there, but go anyway, they have $5 pints all month long.
Thank you, George Washington, for so much.

Bottoms up, stay presidential!
at 8:57 PM