By Brew Radely
One of the newest additions to a bustling and competitive downtown Greenville establishment of imbibery, at first glance, the Carolina Ale House looks like the new hot chick in your 8AM Brewpub 101 class. Her figure is well endowed with two full floors of real estate while her wide open floor to ceiling glass eyes lure you seductively with full seats of happy tipplers and beer signs with sexy neon letters that don’t spell Coors or Miller. Her fine ass sits smack in the middle of Main Street, a cannon shot away from the beautifully manicured Falls Park and a slingshot away from the historic Westin hotel where my white (and decidedly less fine) ass was staying. Her perfume is rich and sour, the familiar and ubiquitous eau de microbrew. From the outside, she’s stacked. You’d hit it, no questions asked. But as we all know, the hotties aren’t always as balanced on the inside.
The first pangs of schizophrenia strike with the copious sports memorabilia. If you are familiar with the South’s vampiric thirst for college ball, the strategically agnostic dispersal of Clemson, Furman and USC banners, pics and autographed jerseys really should come as no surprise. But it just feels slightly off when staring down the barrel of 40 plus taps of varied suds. Nothing wrong with sports bars or brewpubs, but the two together feel a bit like a peanut butter and mayo sandwich or a Jay-Z /Barbra Streisand mashup (BarbrHOVA to the Iz-Ay, uh huh- just doesn’t work, does it?). But décor melange alone does not a night of beer drinking ruin, eh lads? On to the pints. 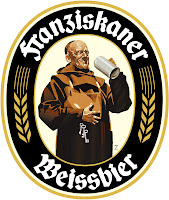 The beer menu spans an eclectic volume with a nice concentration of localish brews like Sweetwater Brewing Company and Thomas Creek. I began with Atlanta’s own Red Brick Laughing Skull. I was not disappointed with this palatable amber. It has a nice hoppy base, warm red glow and a crisp finish. Unusually paralyzed by the myriad choices, I floundered for my second (and third) brew and fell upon one of my all time favorites. Franziskaner Hefe-Weizen. Franz is one of those brews that I get so excited about when I see it on the menu I quickly order a pint, total squirrel instinct taking over (I've even been known to store one in a dark nook near the table at the first sign of danger). Then after a few, I reflect that I drink it pretty often, it's not that rare a find and I should probably stray off the reservation more frequently for variety's sake. Honestly though—one look at my fave fat, stein-hefting monk is just too much and I am wrapped back in the comfort of his Schafherde with the quickness. If you can tell him nein, you are a better man than me.
De rigeur for most of my roving travels, I have no idea of the individual pint cost. The corporate teat on which I roll has its advantages, and not worrying about beer prices while visiting customers is among them. But I will say this. We were probably 8 or 10, we drank for a good two to three hours replete with a round of Flaming Dr. Pepper shots and the bill miraculously came to $118 before tip. So they are doing something right because that drinky-drink episode in NY or Boston would have had registered easily triple the damage.
The waitstaff was fine—a little more attention would have likely yielded a larger tab (and probably another round of ill conceived shots, so I guess I thank them)—but given the busy night, this is easy to forgive. I’m not sure if the joint ever rocks live music, but that addition would have absolutely nudged a good night to great.

I got home from the trip and decided to do a little research to finish off the review. It was with a little more than a little chagrin to learn that CAH was a chain, albeit regional. I don’t know if it’s more disappointing to learn this or the fact that I didn’t figure it out sooner from the hamfisted clues given. With that we close on a slightly contemplative note—which is the more egregious sin—corporate chain cheese or the emulation of cheese? Stay punk rock as long as you can, indie pub owner, for the love of Baccus.
at 10:57 PM