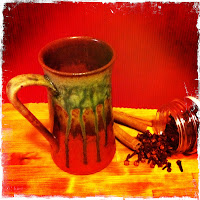 By Johnny Lager
Famed for relieving a head cold and clearing a nose, a Hot Toddy is a delicate, medicinal brew, to ease what ails you. It is not exactly a hearty drink, or bone warmer. Leave that heavy lifting to pros like Irish Coffee, or straight brandy. Perhaps a gentle Toddy even reminds you of your gran, but there is something undeniably gentlemanly and self-sufficient about brewing up an old-fashioned cup of antidote.

There are so many variables and variants I was hesitant to even write this article. It seemed like it would go on forever; but a lot of readers have their late winter cold early, and I was feeling public-servicy. So, I present the traditional Hot Toddy, and a few tips. I'll leave you to adjust it to your own taste, everybody should to have their own recipe. 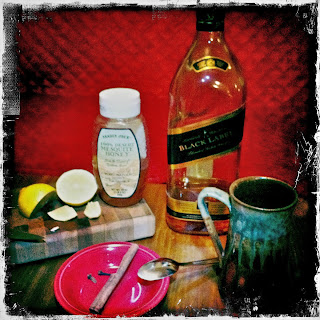 The Build: As you blearily assemble your ingredients, put the kettle on. Do not overheat the water, take it off before it boils. It's probably easier to microwave a mug for 2-3 minutes. Otherwise you will overwhelm yourself with cinnamon, burn your lip and have to wait to for your brew to cool down.

Pour 6 ounces of steaming water into a mug followed by in 3-4 cloves, a slice of lemon and a tsp or less of honey and stir. Be careful not to over-sweeten or you wind up with a potion that starts boozy but has a candy finish. Add a tea bag if you fancy. Fancy lad. Next, drop in the cinnamon stick. The scent of cinnamon tempered by clove immediately fills the air. These ingredients will need to be adjusted not only to your taste, but to the potency of your stash. Now, take a little tip from Johnny and don't pour the Scotch in 'till the brew has steeped, or else you may evaporate too much of it's potency. 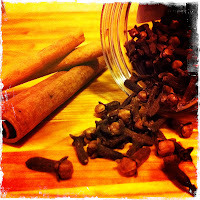 Steep for 3 minutes. Then get that cinnamon out! Quickly! Hurry! Your ruining it! HURRY! Good, now you can let it continue to brew down to whatever temp you like.

A traditional Hot Toddy is made with Scotch, not Brandy, or even some other type of Whiskey. I recommend an inexpensive blend like the very serviceable Johnnie Walker Black Label. Scotch has a distinctive and strong flavor, so some prefer to use an Irish blend, or the sweeter Bourbon. But I'm a traditionalist, and I firmly believe that Scotch will scare that bastard cold away.

The Experience: While it has a scent similar to spiced cider, with a kick like a mule, this is a delicate brew, going down easily, gently slipping past your cold like a suave and cultivated Scots spy; delivering you from rhinoviruses, coronaviruses, and SMERSH.

So there it is, the traditional Hot Toddy. Now go and experiment. Find out what works for you. I have my own recipe, but I'll write about the in the fall. In the meantime, I'll say this: I prefer the traditional English variation which uses black tea, adding some elegance and caffeine. I sensibly use English breakfast tea.