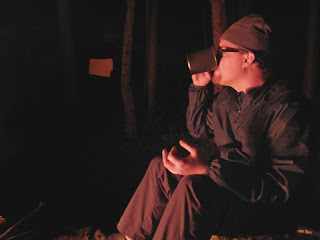 In the interest of the transition from drinkers of quantity to drinkers of quality, it is therefore an appropriate moment to share recent adventures with Everclear, as a liquor to be enjoyed while backpacking through the wilderness of northern New York. In comparison and contrast, we will also briefly discuss Evan Williams Bourbon. The reader will quickly tell where the author’s personal taste lies.

In recent years I have become increasingly interested in lightweight backpacking, forsaking such traditional items as a steel mess kit complete with cutlery, and opting instead to heft a titanium mug and spork weighing a scant 4 oz. Such a modus operandi has delivered me to a dark hour of uncertainty: Should I leave behind a tried-and-true favorite backpacking libation, that delicious woodsy drink whose aroma reminds one instantly of pipesmoke, caramels, and success? Should I abandon sweet, sweet Bourbon and, in the interest of a lighter pack, carry Everclear into the deep woods? Aye friends, it was a dark hour indeed.

As a backpacking booze, Everclear (the 190 proof variety) is roughly twice as strong as the typical hard liquor, making it roughly half the weight for the percentage of alcohol. If whiskey is a steak, Everclear is jerky (jerky that can also marvelously double as alcohol stove fuel, a medical antiseptic, and a pipe cleaning fluid, for those gear-heads who love multi-tasking items). Bourbon, on the other hand, has qualities of flavor that render it inseparable from the wilderness experience, IMO, and while the careful mixing and sipping of Everclear did in fact yield a handful of palatable cocktails during our tests, Bourbon’s melancholy absence was noted in the brilliant stars of the black October sky. While Everclear’s essential value as a lighter option is incontrovertible, let us get down to brass tacks regarding flavor and drinkability:
The (absolute absence of) flavor is warm, bright, and surprisingly smooth, with a finish that will leave your throat sore for half an hour. As drinkers of quality will intuit, sipping neat is not recommended. Our test group found that the tastiest option was a screwdriveresque mix of 1 part Everclear to 6 parts orange juice. Ginger ale also served as a nice accompaniment under the same proportions. It was another and more pertinent matter altogether to adapt this fiery liquid for use as a backpacking booze. We tested three instant drink powders into one weird mixture of fruit punch and apple, another with fruit punch alone, and a third with grape in the same, roughly 6-1 proportions. Each cocktail was pleasantly toxic tasting, brightly-colored with artificiality, and quick to embuzz the sipping testers. It was also something of an hourly spectacle to spit fire into the campfire (with such excess, why not?). Most surprising and most welcome was the apparently forgiving nature of Everclear the next morning, presumably due to the relative absence of impurities, as well as the high standard of professionalism with which our testers tested.
The author concludes that on paper, Everclear excels as a backpacking booze. It multitasks, gets the job of buzzwork done, and won’t weigh the backpacker down. However, in the transition from quantity to quality, we discover that some things are simply well worth their weight. Leave this hot-tempered liquor elsewhere, and hoist your amber-hued Bourbon of choice. Cheers from under tall pines.
at 10:02 PM