COCKTAIL KUMITE Round 4, Ernst Vs Negroni!

On the 02/17/14 Dig Radio live broadcast of the Dr. Radio Show, we went to round 4 of the Cocktail Kumite! [Bracket sheet here]

Serve on ice, in a Collins glass. Garnish with a twist of lemon and/or cherry if desired.

Garnish with an Orange Peal

Stir over ice, strain into a cocktail glass, garnish by breaking the orange peel over the drink, then dropping it in.

WHICH COCKTAIL WILL WIN THIS ROUND OF KUMITE?!
Read more »
at 2:02 PM 2 comments:

On the 02/03/14 Dig Radio live broadcast of the Dr. Radio Show, we went to round 2 of the Cocktail Kumite! [Bracket sheet here] I was home with bronchitis, tweeting gibberish, so Dan mixed both cocktails.

Shake over ice, strain into a cocktail glass, do not garnish.

Shake over ice, strain into a cocktail glass, do not garnish. You can float the 2 dashes of bitters on top for a lovely presentation.

WHICH COCKTAIL WILL WIN THIS ROUND OF KUMITE?!

On the 01/27/14 Dig Radio live broadcast of the Dr. Radio Show, we started the Cocktail Kumate! [Bracket sheet here]

Shake, serve up in a cocktail glass.


Shake, serve on the rocks in a Lowball glass.

WHICH COCKTAIL WILL WIN THIS ROUND OF THE KUMITE?!
Read more »
at 2:05 PM No comments: 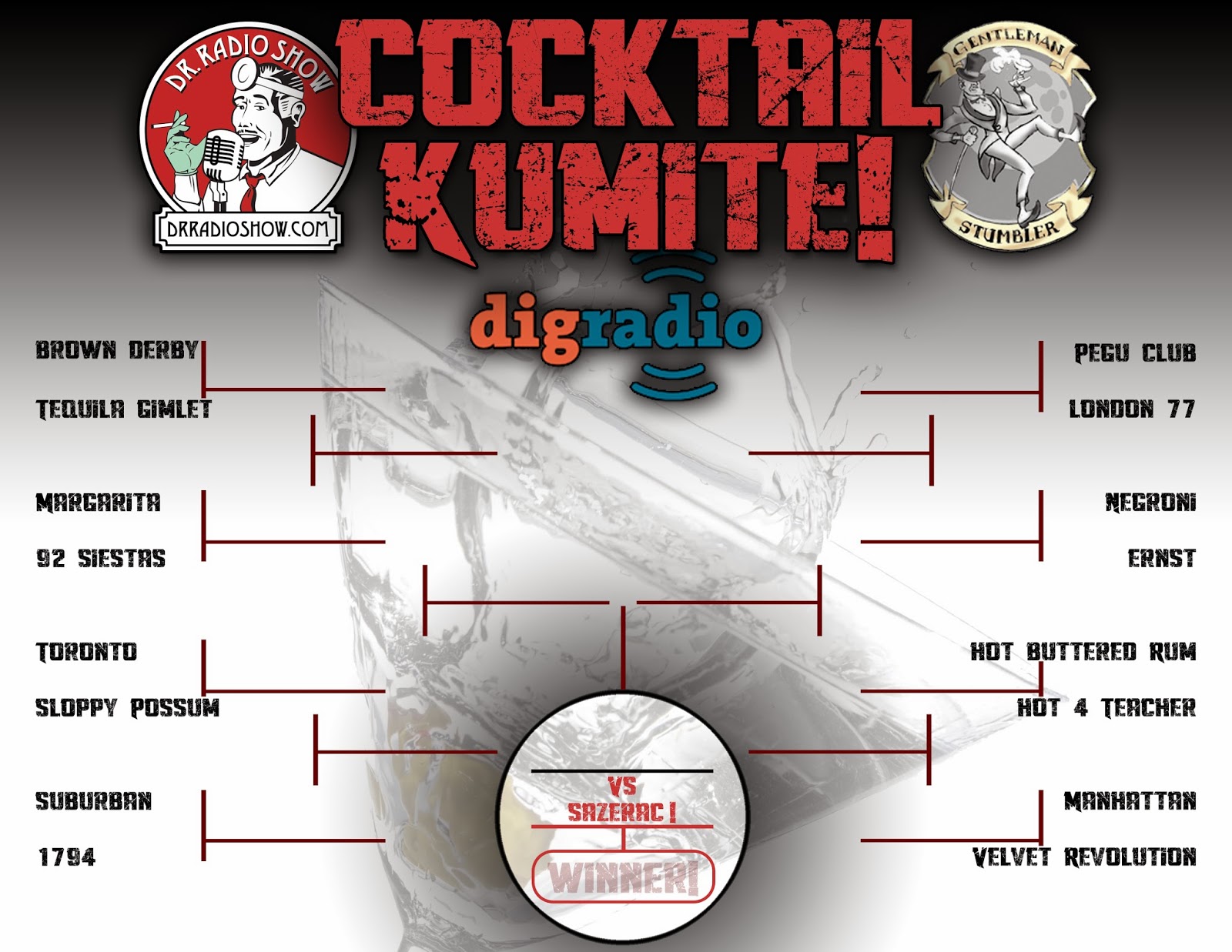 The Tuxedo Cocktail is a lesser known relative of the Martini and perhaps rightfully so. Sherry is a rare ingredient in modern bars. But don't count the Tuxedo out, the use of fino sherry instead of the familiar vermouth, creates a low-key, dry, slightly nutty cocktail, brightened by the citric pepperiness of the orange bitters. The gin's floral, juniper notes come through a little better with the originally prescribed Plymouth, than, say, Bombay or Amsterdam. It is imperative that you do not garnish with a lemon, because it will throw the balance completely off. You could try a twist of orange, but I think grapefruit would be better. Though I've tried neither.


Don't worry about adding sherry to your home bar, it may sound fancy, but you can get some for as little as 5 bucks. Just understand, the character of any cocktail is affected by the quality and nuances of the ingredients. Still, I wouldn't spend too much on anything you plan to pour into gin.

So what is Sherry, anyway? It is a fortified wine, but not one of the Hobo varietals. It is made with white grapes, in that general Jerez de La Frontera, Andalusia, Spain area we are all so familiar with. Sherry is produced in a variety of dry styles, Fino, being the driest. If drank on its own, sherry is meant to be served cold. Even people who love sherry, acknowledge that it is terrible.

This cocktail is featured in the Old Waldorf Bar Days by Albert Stevens Crockett, 1931, but its history is well known. The Tuxedo Cocktail is named after the same country club that the renowned suit of clothing is named after. Seems a bunch of punk (rich) kids, staying at the club cut the tails of their dress coats in the late 1800s. And like punk-rock styles do, this one caught on. I'd like to think they were bombed on these cocktails when they got frisky with their dinner attire, but chances are they just told their terrified servants to ruin their wildly expensive clothes.

Until next week, my little cumber bunts,
Bottoms up and stay classy.